These articles were published in the last two months. All deal with the Assateague horses and Chincoteague ponies in VA and MD.

A centuries-old horse tooth might be the last piece in the genetic puzzle of Assateague’s horses, by Zoe Sottile, CNN, August 7, 2022

“The famous wild Chincoteague ponies have lived for centuries on Assateague Island…but no one is quite sure how they got there. A 1947 children’s book inspired by local legend, “Misty of Chincoteague,” suggests that the ponies are the descendants of Spanish horses who swam to the island after a Spanish ship wrecked off the coast of Virginia, reverting to a feral state over the years.”

Nicolas Delsol, a postdoctoral researcher at the Florida Museum of Natural History, conducted DNA sequencing on a “huge collection of archaeological remains” from Puerto Real, an early Spanish town located in modern-day Haiti. The town was established by the Spanish in 1507 but abandoned in 1578.

“One of the bones that I thought was from a cow was misidentified,” Delsol explained in an interview with CNN. “A small fragment of tooth was actually [from] a horse…”The discovery was “completely unexpected,” said Delsol. “We quickly realized it was maybe the first domestic horse genome that we had from the early colonies of America.”

Two Assateague Horses go on a stroll to the mainland:

A pair of wild horses on Assateague island named Happy and Lightning decided to cross the Verrazano bridge to the mainland. Traffic came to a standstill during their slow journey.

“[They] managed to get across the bridge, and that doesn’t happen very often, the Verrazano bridge is very high, very long, and it’s very rare that the horses attempt to go across it,” explained Hugh Hawthorne…”

Chip, an Aggressive Food-Conditioned Horse is Removed from Assateague

As we all know, it’s not an animal’s fault when humans interfere in their pursuit of food by feeding them or leaving food behind in camps or picnic sites. Chesapeake Bay Magazine describes a horse who was  “resistant to the park’s usual non-contact methods to move horses out of potentially dangerous situations.” As a result, he left people injured. Chip has been “permanently moved to Cleveland Amory Black Beauty Ranch, a wildlife sanctuary in Murchison, Tx.” This sanctuary is well known and highly regarded. Read more at the headline link to the Chesapeake Bay Bulletin, Meg Walburn Viviano, May 2022.

In 2022, our resolution is to plant more native plants in our yards that attract pollinators, like bees, butterflies, and hummingbirds. These links will lead you to resources regarding native Maryland plant species: 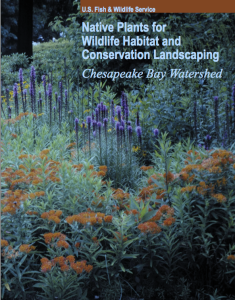 Click here to access the 184 page PDF document about native plants in the Chesapeake Bay Watershed from the U.S. Fish & Wildlife Service

About Our Collective Impact

For those of us who love facts, this link will send you over the moon. Find information updated in 8/26/2022. Enjoy!